Welcome aboard! We are the Massachusetts Bay Council of the Navy League of the United States.

The Navy League of the United States was founded in 1902 with the encouragement of President Theodore Roosevelt. The Navy League is unique among military-oriented associations in that it is a civilian organization dedicated to the education of our citizens, including our elected officials, and the support of the men and women of the sea services and their families. Further information may be obtained by visiting the web site www.navyleague.org.

The Massachusetts Bay Council, as chartered by the Navy League of the U.S., is a non-profit, educational, 501.c.3 organization with roots back to 1955; With over 500 members and not charging any local dues, we support our Sea Services in many ways. We make many awards to Navy, Coast Guard and Marine personnel, as well as NROTC and JROTC units in eastern Massachusetts, sponsor nine Sea and League Cadet units, sponsor a Maritime Symposium for college students, raise funds for the Marine Toys for Tots program, and much more. We keep our members apprised of legislation affecting Sea Services and encourage them to communicate with their Senators and Congressmen.

NAVY LEAGUE DUES are only: Regular Member $55; E-Membership (everything on line) for $25, and other categories. Opportunity to recruit new members or give a gift. Applications are found at https://join.navyleague.org.

TOYS FOR TOTS: Our 44th Annual Toys for Tots (TFT) event was cancelled due to COVID-19 restrictions but contributions were requested by mail and e-mail. Thanks to our generous members and bargain shopping, we were able to donate over Seven Thousand (retail value) Dollars worth of toys and games to the Marine Corps Toys for Tots Program.

MASSACHUSETTS BAY COUNCIL ANNUAL MEETING was held electronically on ZOOM on November 30, 2020: Highlights of the Annual Meeting included election of officers for 2021, amending the Bylaws to allow electronic meetings, reports on the status of construction and commissioning of USS Massachusetts (SSN 798), and, more immediate, USS Nantucket (LCS 27).  Also looming are commissioning of several Coast Guard cutters. The OFFICERS AND DIRECTORS FOR 2021 are listed on the Officers page.

NAVY BIRTHDAY & NAVY DAY: Cancelled due to COVID-19 restrictions. We will plan for 2021 if gatherings are permitted.

NATIONAL CONVENTION: Postponed due to COVID-19 restrictions. A Special Meeting was held January 16 - 17, 2021 to elect the National President - Elect who will assume the Presidency at the next Navy League convention, scheduled for June, 2021. In accordance with new Bylaws, elected as delegates from the Massachusetts Bay Council were Bill Kelly, Jr., Eleanor Samuels, Jim McLoughlin, and Ivan Samuels. National Directors consist of National Officers, Region Presidents and several others.

AWARDS to worthy Sailors of the Year were presented by the commands, in lieu of a council representative, including USS Thomas Hudner (DDG 116), several Coast Guard ships, and other commands.

NOTE: Due to COVID-19 restrictions, we were again held to using ZOOM for Board Meetings. Thanks to our generous members, the "Please Don't Come" Luncheon raised sufficient funds to support our youth programs. In March we had a ZOOM meeting with Commander John Benda, C.C., USS Constitution, for an evening covering subjects of interest about the ship, its crew and other matters. November brings the start of our 45th year of supporting the Marine Corps Reserve Toys for Tots Program.

Submit your change of address or e-mail to the Webmaster. 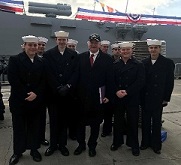 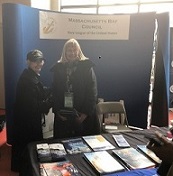 Next Board of Directors Meeting: 29 November 2021, followed by Annual Meeting

Note: All Board meetings will be conducted by conference call until further notice due to COVID-19.

When you shop at
smile.amazon.com
Amazon will donate at no cost to you 0.5% of your purchase price, Select Navy League Of The United States Massachusetts Bay Council as your Charity.